Today five guests joined me on the JIL. Three of them, Lee & Candyce Johnson and Randy Spencer fished with me last year. This year they brought two friends to enjoy Alaska’s wealth of fishing, scenery and wildlife.

The group wanted BIG halibut today, so we headed south and across Chatham Strait. Captain Garfield showed me the way, where he caught and released several monster halibut yesterday. Candyce’s rod went off first, bent double with a nice halibut. Half way up it came off the hook. Half an hour later she again hooked a nice halibut but it came off the hook again. I figured it was the same halibut that had been through a commercial long line and likely had a tear in its jaw, preventing a solid hook placement. Oh well, at least she got to experience a bent rod.

Randy Spencer fished with a FAT Head jig and 7.5 inch FAT Squid and caught the only keeper of the day as well as releasing a little ping pong paddle sized halibut. The star of the day was Lee Johnson, who first hook this nice 60.5 inch 110 pound halibut. After measuring the fish and getting the barbless circle hook out of its jaw we released it and watched as it splashed me in the face as it flipped it tail toward the 300 foot depth.

Half and hour later Lee hooked up again and fought a 55-inch halibut to the surface. Here at Whaler’s Cove Lodge, guided guests who release the largest halibut during their four or three day trip compete for a 2 for 1 certificate for a return trip. Lee is in the lead, but has to sweat three more days of fishing, while hoping nobody else catches and releases a bigger fish than his. If he wins he will receive a 2 for 1 4-day fully guided trip back to the lodge. I’m sure Randy Spencer, JR and Wade, my three other guests will do their best to try and best Lee’s catch. The rest of the guided fleet will also try hard to beat his catch. Good luck to everyone at the lodge. 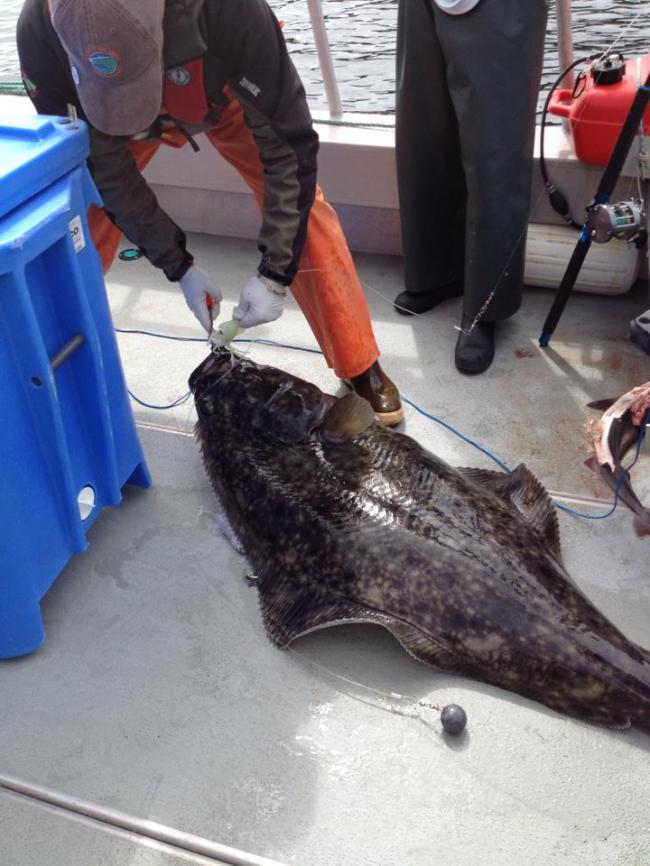